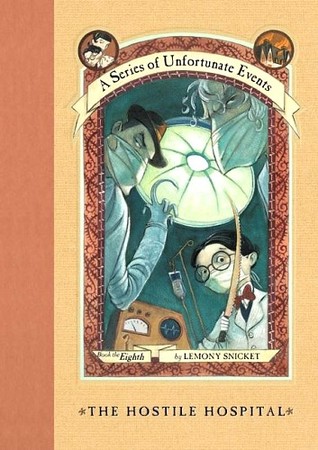 Dear Reader,Before you throw this awful book to the ground and run as far away from it as possible, you should probably know why. This book is the only one which describes every last detail of the Baudelaire children’s miserable stay at Heimlich Hospital, which makes it one of the most dreadful books in the world.There are many pleasant things to read about, but this book contains none of them. Within its pages are such burdensome details as a suspicious shopkeeper, unnecessary surgery, an intercom system, anaesthesia, heart-shaped balloons, and some very startling news about a fire. Clearly you do not want to read about such things.I have sworn to research this story, and to write it down as best I can, so I should know that this book is something best left on the ground, where you undoubtedly found it.With all due respect,Lemony Snicket

“E!” Klaus cried. “E as in Exit!” The Baudelaires ran down E as in Exit, but when they reached the last cabinet, the row was becoming F as in Falling File Cabinets, G as in Go the Other Way! and H as in How in the World Are We Going to Escape?”

Well, not really, since as much as they wanted to find out more about the fire that killed their parents, and the Quagmire Triplets, and VFD, they were sooooo close but too late. Once again, these series of unfortunate events continue to deliver lackluster outcomes on the fate of the Baudelaires and why their parents had to die in such a tragic way.

At least we know that there is a mysterious file about the Baudelaires, including a potential survivor of the fire, and two people that were friends with the Baudelaire parents, but who Violet, Klaus and Sunny have never met in their life! Wow, did that sentence even make sense?

The series is definitely getting better, and we are getting so close to figuring out everything! Like what the REAL VFD is, and where the Baudelaire file is, and why the heck is Count Olaf is such an evil creature!