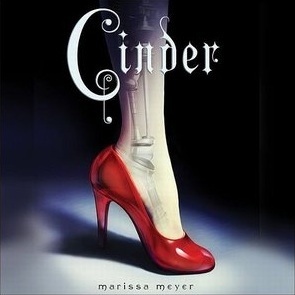 The #1 New York Times Bestselling Series!A wicked mash-up of fairy tale and Terminator—set in a Star Wars kind of world—Marissa Meyer’s Cinder is a fresh and fiercely ingenious futuristic retelling of CinderellaHumans and androids crowd the raucous streets of New Beijing. A deadly plague ravages the population. From space, a ruthless lunar people watch, waiting to make their move. No one knows that Earth’s fate hinges on one girl. . . .Cinder, a gifted mechanic, is a cyborg. She’s a second-class citizen with a mysterious past, reviled by her stepmother and blamed for her stepsister’s illness. But when her life becomes intertwined with the handsome Prince Kai’s, she suddenly finds herself at the center of an intergalactic struggle, and a forbidden attraction. Caught between duty and freedom, loyalty and betrayal, she must uncover secrets about her past in order to protect her world’s future.

I absolutely loved this book. I don’t know why I didn’t take the time to read this before! I think it was probably the length of the book, and I was getting intimidated by the size. Boy, what a huge mistake I made. I can’t believe that I am only now getting to this amazing series.

Technically this story is supposed to be a retelling of Cinderella, in case you couldn’t guess by the title and the leg with the heel on the cover. But if you’re thinking that this is going to be similar to the Disney version, or even the Grimm Brothers’ story, you would be dead wrong. This is nothing like Disney’s Cinderella, and it’s so much better. Yes, there are some elements that are similar: the stepmother and stepsisters, not being allowed to go to the ball and being treated like trash, a handsome prince that Cinderella ends up falling in love with, and all that jazz.

“Even in the Future the Story Begins with Once Upon a Time.”

However, it gets so much better than just a typical love story. Not only is Cinder a freaking cyborg, but she’s also the best mechanic on her side of New Beijing, and that’s how she ends up meeting Prince Kai. She can fix pretty much anything, and when Prince Kai needs his favorite android fixed, he went to her booth in the market. But things start to go downhill when there’s an outbreak in the city, a plague that has a 100% kill rate once you get infected, and somehow her stepsister Peony gets infected. Peony is the only human stepsister that actually likes Cinder -Iko is an android, but she loves Cinder too – and Cinder believes that everything is hopeless. Nobody has ever survived the plague before, and was it her fault that her sister got sick? She certainly thinks so.

So when her evil stepmother sends her away to “volunteer” to be a test subject for the research to find an antidote, she’s basically going to her death.

But she doesn’t die, and that’s where the real fun begins.

Not only is there a plague infecting the Earth, but Queen Levana of Luna (yes, literally the queen of the Moon people) has a plan to either take over the Earth and everyone in it, or go to war with them and destroy them all. What could go wrong, right?

If you haven’t done so already, you seriously have to read it. I loved this book. I couldn’t get enough of it. And it doesn’t end with Cinder! There’s more books! And more people become involved in this amazing adventure. Just trust me, you won’t regret reading it.

One thought on “Cinder by Marissa Meyer”