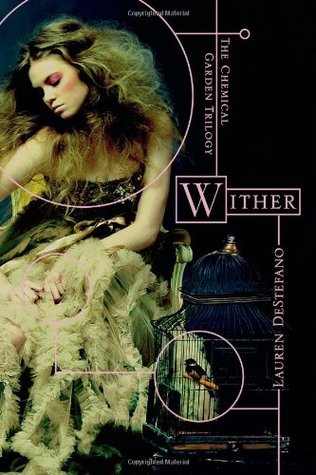 In the not-too-distant future, genetic engineering has turned every newborn into a ticking time bomb: Males die at age twenty-five, and females die at age twenty. While scientists seek a miracle antidote, young girls are routinely kidnapped and sold as polygamous brides to bear more children. When sixteen-year-old Rhine is taken, she enters a world of wealth and privilege that both entices and terrifies her. She has everything she ever wanted – except freedom.
Soon it becomes clear that not everyone at her new husband’s home is how they appear. With the help of Gabriel, a servant Rhine is growing dangerously attracted to, Rhine attempts to escape… before her time runs out.

I’m 25 years old. According to this book, I would have been dead five years ago.

I thought about that a lot when I was reading this book, especially because I think about where I was during my life five years ago. Would I have been happy to die at that age? Would I have felt like there was more out there for me and tried to fight for the chance to live and die the way I wanted to? That’s the amazing thing about dystopian books. It gives you a chance to imagine the world in a completely different way.

The book starts in complete darkness. Our main character Rhine is in a truck full of other girls, lost in the dark and they have no idea what’s in store for them. They were just taken from their homes and there’s no guarantee that they will ever go home. Rhine and two other girls – Cecily and Jenna – out of the entire group of girls in that van end up being whisked away to be the wives of a boy around their age, who just so happens to have a rich father. It’s there that Rhine has to learn that there’s a world out there that she isn’t used to, and not everything is as it seems.

In this world, cancer and every other human biological flaw have been “cured”, and the first generation of children to be born cancer and flaw-free grew up strong and healthy, with a lot of them still being alive today. However, it was their children and the children afterward where the problem was found. Every single generation after the first generation ends up dying at a young age. The males die at age 25, and the females die at age 20, no matter what. According to the first generation, there’s a virus that makes every single child a ticking time bomb. There are scientists out there that are working desperately to find a cure but to no avail. And yet there are other people that make it a point to do much worse things, from kidnapping girls from off the streets and selling them to be the baby-bearing brides to the rich.

Not all of these girls end up being wives though, not even sister wives like Rhine, Cecily, and Jenna became as the book progressed, and those that were not chosen could be found dead in the streets or disappeared entirely. When there was no chance of living past a certain age, it didn’t matter who ended up living or dying at an early age.

Rhine ends up having a very rare “birth defect” that just so happened to save her life. She has heterochromia, where one eye is brown and the other is blue. Everyone who meets her notices it, and they don’t always believe that they are actually real eyes. This is what ends up saving her from certain death, and it may also hold the key to the virus that kills everyone. At least, that’s what Rhine thinks when her captors basically tell her that her eyes are what makes her special and not as disposable as the others.

This book was interesting to me. To know that all of the children in the world are basically on a time limit is heartbreaking, and when factoring the fact that some of these children wind up murdered makes it even worse. Rhine basically had to lie to herself and to her husband Linden to make him think that she actually loved and cared for him when all she could think about was running away back to her twin brother. While she did end up learning how to care for him in the end – as well as Jenna and eventually Cecily – it didn’t take away from her main goal. It didn’t matter what it took, she wasn’t going to spend the rest of her life in this beautiful prison. It took her a while, but she ended up doing something about it, and that’s what matters.