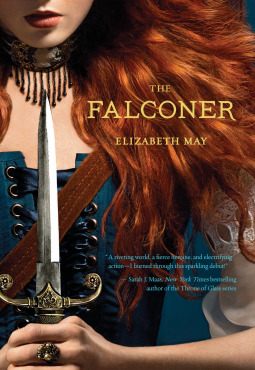 Edinburgh, 1844. Beautiful Aileana Kameron only looks the part of an aristocratic young lady. In fact, she’s spent the year since her mother died developing her ability to sense the presence of sìthichean, a faery race bent on slaughtering humans. She has a secret mission: to destroy the faery who murdered her mother. But when she learns she’s a Falconer, the last in a line of female warriors and the sole hope of preventing a powerful faery population from massacring all of humanity, her quest for revenge gets a whole lot more complicated. Now in paperback, this electrifying thriller—the first volume of a trilogy from an exciting new voice in young adult fantasy—blends romance and action with steampunk technology and Scottish lore in a deliciously addictive read.

I stumbled across this book at the library here in Virginia, and when I read the synopsis of it, I knew that I had to try it out. Lo and behold, it would end up being one of my favorite books this year.

For one thing, the steampunk aspect of this book, paired with 17th Century Scotland was something that I didn’t expect to work so well but it really did. Maybe the only thing that kind of messed me up was that I would keep forgetting that Aileana was Scottish until she’d say “Aye”. It was as if I was in an entirely new world filled with the infamous Fae creatures that I’ve come to learn and love – well some of them anyway – in an entirely new light that was nice to hear about.

Let me start off by saying that I personally liked Aileana. Yes, she’s actually a proper Lady, with money, status, and a title that not all women can say they have. If she were to get married, her husband would probably inherit a lot of wealth and prestige. However, ever since her mother was murdered right in front of her eyes, she had no desire to be a part of that world anymore. She had vengeance in her heart, almost to the point of hatred, and all she wanted to do was find the Fae that killed her mother and exact her revenge. In the meantime, she did what she could: taking care of the other dangerous Fae around Edinburgh so that the human casualty rate wasn’t ridiculously high.

But how did she go from a lady that only cared about society’s parties, to someone that would spend her days inventing new weapons and her nights slaying the Fae?

She had a mysterious teacher, one that wasn’t all that human himself. She spent an entire year training with him, a Fae named Kiaran, one of the most powerful breeds of Fae in existence. But what she didn’t know was that there was something far worse at stake, and all of her nights that she spent fighting alone behind Kiaran’s back would make her a target, and the real fight would begin. She would have to put aside her revenge plans and figure out how a barely trained Falconer, a breed of warrior woman that have the power to kill the Fae, would be able to save the world on her own.

Aileana was an interesting protagonist. She had no problem letting us know that she was in pain, and having the memory of her mother killed right in front of her eyes was something that she couldn’t let go of so easily. Anything that even resembled her mother would bring her back to that night, and it would fill her with such a rage that it was almost dangerous to be around her. She knew that, and she tried to suppress it as much as she could around Kiaran so that he wouldn’t know her weakness. It was something that despite all of her efforts, she just could not let it go. She felt like it was her fault that her mother was murdered because she didn’t do anything to stop it. It led her to go out the next night and immediately try to kill a different Fae, and while she almost died, it was a good thing that Kiaran found her. She was thoroughly untrained that first night she tried to fight, and even though she knew it, she still wanted to satisfy the lust for death in her heart. The more she would kill, the happier she felt, even if it was just in that moment when the light would leave her victim’s eyes.

I also liked the fact that she is an inventor. She created her very own flying machine, even though it seems like many of the rich families have at least one of their own. She designed and created her own, with a bat as the inspiration for its wings. She created all of the weapons she would use against the Fae. It was something that she would do with her mother, and even though her mother was gone, she kept up this important hobby that would become useful to her in her future battles. All in all, I liked her personality and her ingenuity.

One of the things that confused me though was how sometimes the chapters would jump through time. One chapter would end with a certain event going on and the next chapter would start off hours or even half a day later. It made me feel like I was missing something, or that I needed to go back and make sure that I didn’t skip a page or something like that. I understand that not all chapters have to take place back to back but it still left me confused. The ending as well was one that I didn’t understand. It ended up abruptly that I had to go back and see what happened, and yet I still didn’t quite get it. Something definitely happened, but hopefully the next book will be able to explain it better than this first one did.