Raw, captivating, and undeniably real, Nic Stone joins industry giants Jason Reynolds and Walter Dean Myers as she boldly tackles American race relations in this stunning debut.Justyce McAllister is top of his class and set for the Ivy League—but none of that matters to the police officer who just put him in handcuffs. And despite leaving his rough neighborhood behind, he can’t escape the scorn of his former peers or the ridicule of his new classmates. Justyce looks to the teachings of Dr. Martin Luther King Jr. for answers. But do they hold up anymore? He starts a journal to Dr. King to find out.Then comes the day Justyce goes driving with his best friend, Manny, windows rolled down, music turned up—way up, sparking the fury of a white off-duty cop beside them. Words fly. Shots are fired. Justyce and Manny are caught in the crosshairs. In the media fallout, it’s Justyce who is under attack.

“Yeah, there are no more “colored” water fountains, and it’s supposed to be illegal to discriminate, but if I can be forced to sit on the concrete in too-tight cuffs when I’ve done nothing wrong, it’s clear there’s an issue. That things aren’t as equal as folks say they are.”

This book almost hit me as hard as The Hate U Give by Angie Thomas. Both deals with racial discrimination and police brutality, but they are two different stories that need to be read.

I think this one made me angrier because of the way the story was told. For one, this has a lot more dialogue driven chapters, almost as if I’m reading a script for a movie than reading a story. It worked for me though, and it allowed me to really feel the emotion that Justyce was feeling as soon as he felt it. I was so angry with everything bad that happened in this book, and I hurt for Justyce and Manny whenever they would be treated inferior by the white people in their lives.

It hits home for me a lot because I’ve been there. I’ve been looked down on solely for my skin color. I was told that I would probably be “ghetto” because of my skin, pretty much telling me that I’m supposed to be uneducated or something. And this was before I even opened my mouth to speak. What kind of first impression is that? Heck yes, I was angry when I heard that. How can a complete stranger judge me in such a way to diminish me and everything that I’ve worked for to get to where I am today, all because of how I look? How am I supposed to be okay with that?

How were Justyce and Manny okay with that for so long?

Unfortunately for Justyce, it took him being racially profiled by a police officer to really open his eyes. It didn’t matter that he was at the top of his senior class at this super fancy preparatory school and that he was an early admit to Yale. In the eyes of that police office, Justyce was a “thug” trying to carjack his ex-girlfriend’s car, even though it’s clear that he was helping her get in the BACKSEAT of her car because she was drunk off her ass and was trying to drive home. Here we have Justyce doing a good deed for someone who doesn’t even treat him right for the most part, someone he technically doesn’t have to help given their past history, and he gets arrested for attempted carjacking.

This isn’t the only case of injustice in this book, and it’s not the worst thing that happens.

Turn on the news, another black man slain. They say “It’s okay. Save your voice, don’t complain. This isn’t about race, so stop using that excuse. Now look at this funny picture of Obama in a noose! See how color-blind we are? You’re not really black to me. Underneath, where it matters, we both bleed red, you see? So put away that race card, it ain’t 1962. There’s no more segregation… isn’t that enough for you?”

All throughout the book, I just couldn’t believe the audacity of some of the characters and their actions. But I really shouldn’t have been so surprised because it happens every single day. We see it in the news, some of us experience it in our own personal lives, and it’s not just a work of fiction that came out of thin air. It’s a real problem that’s happening in our world today, and something needs to be done to handle it.

You will feel uncomfortable reading this book, and that’s the point. At least feel something when you read this, even if you are one of the lucky ones to not go through any sort of racism, discrimination, or anything else that makes you feel inferior for something that you have no control over. 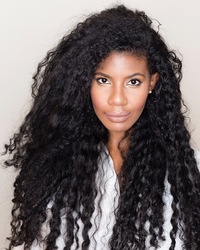 Born: Atlanta, GA, The United States
Website: http://www.nicstone.info
Twitter: getnicced
Genre: Young Adult, Contemporary
Goodreads Member Since: September 2013
Nic Stone was born and raised in a suburb of Atlanta, GA, and the only thing she loves more than an adventure is a good story about one. After graduating from Spelman College, she worked extensively in teen mentoring and lived in Israel for a few years before returning to the US to write full-time. Growing up with a wide range of cultures, religions, and backgrounds, Stone strives to bring these diverse voices and stories to her work.Stone lives in Atlanta with her husband and two sons. You can find her on Twitter and Instagram at @getnicced or on her website nicstone.info.