Sixteen-year-old Twylla lives in the castle. But although she’s engaged to the prince, no one speaks to her. No one even looks at her. Because Twylla isn’t a member of the court. She’s the executioner. As the goddess-embodied, Twylla kills with a single touch. So each week, she’s taken to the prison and forced to lay her hands on those accused of treason. No one will ever love her. Who could care for a girl with murder in her veins? Even the prince, whose royal blood supposedly makes him immune to her touch, avoids her.But then a new guard arrives, a boy whose playful smile belies his deadly swordsmanship. And unlike the others, he’s able to look past Twylla’s executioner robes and see the girl, not the goddess. Yet a treasonous romance is the least of Twylla’s problems. The queen has a plan to destroy her enemies-a plan that requires an unthinkable sacrifice. Will Twylla do what it takes to protect her kingdom? Or will she abandon her duty in favor of a doomed love?

“I am the perfect weapon, I can kill with a single touch.”

I don’t know why I never heard of this book before, but I’m so glad that I was able to find it.

I fell in love with this book from the moment I started listening to it. It absolutely haunted me, and I don’t even know how to explain why it had that kind of effect on me. This world was one that I could see living in, whether it’s our world’s past or future. Not only was the main character Twylla considered the embodiment of the Gods’ daughter, but her birth mother is a woman in charge of eating the sins of the dead.

“My mother is a fat woman, made large from gobbling the sins of the dead, the meal prepared and served to her as if she were a queen for the day. For an Eating the mourners cover the surface of the coffin with breads and meats and ale and more, each morsel representing a sin known, or suspected, to have been committed by the deceased. She Eats it all; she has to – it’s the only way to cleanse the soul so it can ascend to the Eternal Kingdom. To not finish the meal is to condemn the soul to walk the world for ever. We’ve all heard the tales of the wraiths that haunt the West Woods because people less dedicated than my mother could not finish the Eating.”

Twylla was born with a destiny but ends up having another one. Either way, she doesn’t seem to have much of a choice in what she has to do in her daily life. After being taken by the Queen of Lamere to become the newest Princess, Twylla finds out that that’s not the only thing she has to do. She is deemed Dornan embodied, the daughter of two Gods – the God of Life, and the God of Death. To fulfill both Gods, Twylla now has to be Lamere’s executioner, tasked with killing traitors with her touch and watching them die in front of her.

Since everyone in the kingdom knows that she can’t be touched, nobody wants to talk to her unless absolutely necessary. Nobody barely looks at her either, and it makes for a lonely life. She only has the friendship of her main guard – that is until she gets another one named Lief. A friendship blossoms between Twylla and Lief, and while she learns what it’s like to have a companion, there is more at stake for her and the rest of Lamere. Will she be able to save the kingdom, or will she be betrayed when she least expects it?

The ending of this book absolutely broke me, and I’m left with a feeling of heartache and wonder. The survival of Twylla and her people lies in the balance, and I don’t know whether they will be able to handle what is coming.

I can’t wait to find out what happens! 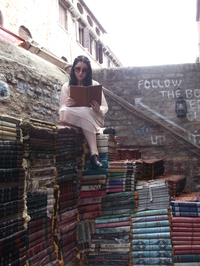 Website: http://www.melindasalisbury.com/
Twitter: MESalisbury
Genre: Young Adult, Fantasy, Romance
Melinda Salisbury lives by the sea, somewhere in the south of England. As a child she genuinely thought Roald Dahl’s Matilda was her biography, in part helped by her grandfather often mistakenly calling her Matilda, and the local library having a pretty cavalier attitude to the books she borrowed. Sadly she never manifested telekinetic powers. She likes to travel, and have adventures. She also likes medieval castles, non-medieval aquariums, Richard III, and all things Scandinavian The Sin Eater’s Daughter is her first novel. She can be found on Twitter at @MESalisbury, though be warned, she tweets often.