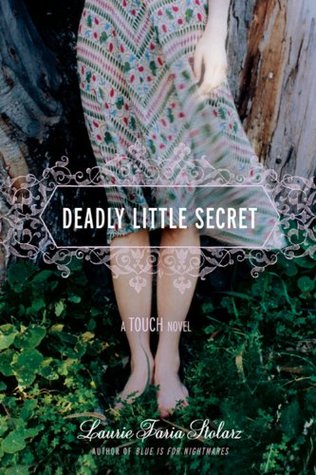 Some secrets shouldn’t be kept…Until three months ago, everything in sixteen-year-old Camelia’s life had been fairly ordinary: decent grades, an okay relationship with her parents, and a pretty cool part-time job at the art studio downtown. But when a mysterious boy named Ben starts junior year at her high school, Camelia’s life becomes anything but ordinary.Rumored to be somehow responsible for his ex-girlfriend’s accidental death, Ben is immediately ostracized by everyone on campus. Except for Camelia. She’s reluctant to believe he’s trouble, even when her friends try to convince her otherwise. Instead, she’s inexplicably drawn to Ben and to his touch. But soon, Camelia is receiving eerie phone calls and strange packages with threatening notes. Ben insists she is in danger, and that he can help-but can he be trusted? She knows he’s hiding something… but he’s not the only one with a secret.From the best-selling author of Blue is for Nightmares comes a new series that’s sure to be a thrilling and chilling teen favorite.

“If it were up to me, all boys would come with a label: Failure to take in small doses may result in irrational behavior, poor judgment, and estrangement from one’s friends.”

I came across this book back when I was visiting my mom and brother in Hawaii. I didn’t get a chance to read it then, so when I saw that my local library had a copy, I figured I’d read it this time. When I was reading the synopsis, I didn’t really understand what it could be about. What was it about this boy’s touch made Camelia go crazy? And why was it that this mystery boy Ben thought her life was in danger? Was it going to be actually interesting, or was it going to be subpar?

I thought it was pretty interesting, at least the premise about Ben. I won’t spoil what it is about him that makes him mysterious, or why he thinks that Camelia is in danger, in mortal danger. But it’s something pretty crazy when you think about it, and hopefully, Camelia will actually believe him.

Can I just say that I am actually super disappointed at the fact that nobody thought to call the police when everything was going down? Clearly, someone is stalking Camelia, and while she doesn’t know who it is, this person is able to get into her house, take photos of her during times when she doesn’t even realize she’s being followed, and leave her random gifts in her bedroom. The first time this happened, the police should have been involved. Teenagers should not be responsible for keeping something as dangerous as a stalker to themselves. They need help, and this book didn’t show Camelia or any of her friends taking the proper action to getting help. No wonder Ben thinks her life is in danger, especially when the stalker starts to escalate in behavior. This isn’t some lovesick puppy. This is something worse, and it doesn’t help either that none of the proper adults are invovled.

For the most part, I thought this book was okay. I still don’t understand why Camelia was so obsessed with the way Ben touched her in the beginning – when he saved her from almost getting run over by a runaway car. She spends three months thinking about it, and it’s not like he touched her in any special way (not on the surface, anyway). She even finds herself touching the same spot on her body that he did, almost absentmindedly. It’s weird. I don’t get it, but maybe that’s just me. I get reminiscing about the time you almost died and how a complete stranger saved your life, but not focusing on how he touched you.

To me, that’s just creepy.

I’m still debating on if I will finish the series. I haven’t checked to see if my library has the rest of the series either so that may also play a part on whether I’ll continue. I’ll see. Hopefully, in the future books, we find out more about Ben, or at least we don’t have another stalker on our hands.

Born: The United States
Website: http://www.lauriestolarz.com/
Twitter: lauriestolarz
Genre: Suspense, Paranormal Romance, Young Adult, Horror
Goodreads Member Since: February 2008
Laurie Faria Stolarz grew up in Salem, MA, attended Merrimack College, and received an MFA in Creative Writing from Emerson College in Boston. Laurie Faria Stolarz is an American author of young adult fiction novels, best known for her Blue is for Nightmares series. Her works, which feature teenage protagonists, blend elements found in mystery and romance novels.Stolarz found sales success with her first novel, Blue is for Nightmares, and followed it up with three more titles in the series, White is for Magic, Silver is for Secrets, and Red is for Remembrance, as well as a companion graphic novel, Black is for Beginnings. Stolarz is also the author of the Touch series (Deadly Little Secret, Deadly Little Lies, Deadly Little Games, Deadly Little Voices, and Deadly Little Lessons), as well as Bleed and Project 17. With more than two million books sold worldwide, Stolarz’s titles have been named on various awards list.