Beautiful and brilliant, Kendra Donovan is a rising star at the FBI. Yet her path to professional success hits a speed bump during a disastrous raid where half her team is murdered, a mole in the FBI is uncovered and she herself is severely wounded. As soon as she recovers, she goes rogue and travels to England to assassinate the man responsible for the deaths of her teammates.While fleeing from an unexpected assassin herself, Kendra escapes into a stairwell that promises sanctuary but when she stumbles out again, she is in the same place – Aldrich Castle – but in a different time: 1815, to be exact.Mistaken for a lady’s maid hired to help with weekend guests, Kendra is forced to quickly adapt to the time period until she can figure out how she got there; and, more importantly, how to get back home. However, after the body of a girl is found on the extensive grounds of the county estate, she starts to feel there’s some purpose to her bizarre circumstances. Stripped of her twenty-first century tools, Kendra must use her wits alone in order to unmask a cunning madman.

“Whoever had said that appearances were deceiving was only partially right; they could also be deadly.”

So I definitely wouldn’t have chosen this book on my own, but I am very glad that I did end up reading it, thanks to a buddy read on Goodreads. Thanks Jennifer for choosing this book!

This was a time travel murder-mystery book. Since I did end up reading a time travel book sometime last year that I absolutely didn’t like, I was worried about this one. That goes to show that I shouldn’t judge a genre by its cover. I really loved the murder mystery aspect of this book, and throughout the entire book, I just wanted to know who the heck the killer was and whether or not Kendra Donovan was going to figure it out.

I was a little confused about the beginning though, thinking that the book spent too much time in the present time, but by the time Kendra was sent away to the past, I understood why it went that way. To give a better background, Kendra Donovan was considered a child prodigy, going to college at only 14 years old and being the youngest person to be accepted into the FBI. It doesn’t hurt that she’s the product of some crazy experiments that dealt with super smart scientists combining their DNA to create even super smarter children – deemed “Frankenbabies”. Everything seems to be going well for Kendra until an FBI mission goes terribly wrong and she almost dies at the hand of a traitor.

After dealing with months of rehabilitation – she did almost die after all – she decides that she’s going to take justice into her own hands and finish the mission that she never got to complete on the night she almost died. Everything seems to be going well too, poetic justice and all that, when the plan goes awry and she somehow finds herself… in the past. Kendra must not have watched many time travel movies because it took her an entire day to realize that she was not going crazy and that she was not the victim of some elaborate prank. No, she was really sent to Aldrich Castle in 1819 England, and she had no idea how she was going to go back.

If that wasn’t enough, now she had to figure out how to catch a serial killer in a time where the term wasn’t even in existence.

That should be fun for an FBI agent, right?

Kendra definitely has her work cut out for her, and without any of the technology she could rely on in the present, she’s going to have to prove that her Frankenbaby brain of hers can solve a mystery on her own before any more murders take place.

I really enjoyed the pace of this book, and while the ending was something that I was a little upset with, for the most part, I liked what happened. I’m interested to find out what happens next, and I’m excited that the final book is coming out later on this year. Maybe I can find out how Kendra’s time travel journey ends. Hopefully on a good note? 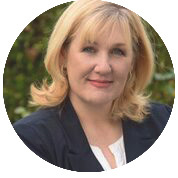 Born: The United States
Julie McElwain began her journalistic career at California Apparel News, a weekly Los Angeles based trade newspaper. She has freelanced for numerous publications from professional photographers magazines to those following the fashion industry. Currently, Julie is West Coast Editor for Soaps In Depth, a national soap opera magazine covering the No. 1 daytime drama, The Young and the Restless. Julie lives in Long Beach, CA.

One thought on “A Murder in Time by Julie McElwain”