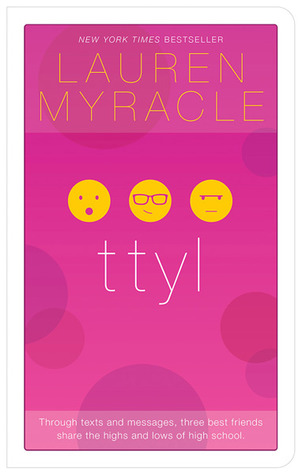 Audacious author Lauren Myracle accomplishes something of a literary miracle in her second young-adult novel, ttyl (Internet instant messaging shorthand for “talk to you later”), as she crafts an epistolary novel entirely out of IM transcripts between three high-school girls.

Far from being precious, the format proves perfect for accurately capturing the sweet histrionics and intimate intricacies of teenage girls. Grownups (and even teenage boys) might feel as if they’ve intercepted a raw feed from Girl Secret Headquarters, as the book’s three protagonists–identified by their screen names “SnowAngel,” “zoegirl,” and “mad maddie”–tough their way through a rough-and-tumble time in high school. Conversations range from the predictable (clothes, the delicate high-school popularity ecosystem, boys, boys in French class, boys in Old Navy commercials, etc.) to the jarringly explicit (the girls discuss female ejaculation: “some girls really do, tho. I read it in our bodies, ourselves”) and the unintentionally hilarious (Maddie’s IM reduction of the Christian poem “Footprints”–“oh, no, my son. no, no, no. i was carrying u, don’t u c?”).
But Myracle’s triumph in ttyl comes in leveraging the language-stretching idiom of e-mail, text messaging, and IM. Reaching to express themselves, the girls communicate almost as much through punctuation and syntactical quirks as with words: “SnowAngel: ‘cuz–drumroll, please–ROB TYLER is in my french class!!! *breathes deeply, with hand to throbbing bosom* on friday we have to do “une dialogue” together. i get to ask for a bite of his hot dog.'”
Myracle already proved her command of teenage girl-ness with Kissing Kate, but the self-imposed convention of ttyl allows a subtlety that is even more brilliant. Parents might like reading the book just to quantify how out of touch they are, but teens will love the winning, satisfyingly dramatic tale of this tumultuous trio. (Ages 13 to 17) –Paul Hughes
Book Overview:
Author: Lauren Myracle | Series: Internet Girls | Format: Paperback (10th Anniversary Edition) | Length: 208 pages | Publish Date: February 18, 2014 | Rating: ★ ★ ★ ★ | Recommend: Yes

mad maddie: zoe, angela is her own worst enemy, you know.
zoegirl: i love her so much, but i do kind of understand what you’re saying. but i don’t know how to tell her that to her face. i don’t even know if i want to say it to her face.

I am so glad I was able to buy the entire series from Barnes & Noble, not to mention that I was able to get the 10th-anniversary edition! Trust me when I say that the story was different from what I remembered all those years ago. The 10th-anniversary edition updated the story to include current shows and trends, like Pinterest and Netflix, all while keeping true to what this journey was basically about.
I loved this book a lot because of its unique format. I remember when I first read this, thinking how it was so cool that the story was told entirely through IMs. I still love that aspect as I read it for the second time in my life. I especially liked that each girl – Zoe, Angela, and Maddie – had their own fonts customized so we could tell the difference between them visually. If you read this book and see the way they message each other, you’d be able to tell who is who easily.
This story takes place during the girls’ sophomore year in high school. It’s a big year for them, as they are getting to the age of being able to drive legally without any parental supervision. They are growing up, learning about love, friendships, betrayals, and everything else that comes with high school. It has been described as a coming of age story, and I can really agree with that statement. They still have some growing up to do, and they do need to learn that their friendship is more important than any arguments or fights they may get into, but I have a feeling these girls will be able to pull through whatever obstacles come their way.
I look forward to rereading the rest of the series, including the newest addition to the story, “yolo”. See? Lauren Myracle really has kept up with the times.
Author SpotlightCourtesy of Goodreads

Born: in Brevard, North Carolina, The United States
May 15, 1969
Website: http://www.laurenmyracle.com/
Twitter: LaurenMyracle
Genre: Children’s Books, Young Adult
Influences: Judy Blume
Lauren Myracle is the author of numerous young adult novels. She was born in 1969 in North Carolina. Lauren Myracle holds an MA in English from Colorado State University and an MFA in Writing for Children and Young Adults from Vermont College. she has written many novels, including the famous IM books, ttyl, ttfn, and l8r, g8r.

Her first novel, Kissing Kate, was selected as one of ALA’s “Best Books for Young Adults” for the year 2004. It was named by Booklist as one of the “Top Ten Youth Romances” of the year, as well as one of the “Top Ten Books by New Writers.” Her middle-grade novel, Eleven, came out 2004, followed by its YA sequels (Twelve, Thirteen, Thirteen Plus One) .