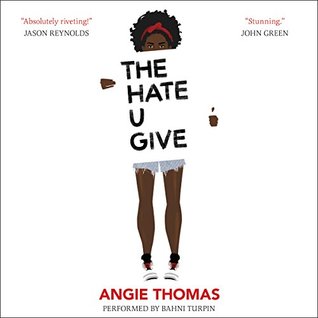 Inspired by the Black Lives Matter movement, Angie Thomas’s searing debut about an ordinary girl in extraordinary circumstances addresses issues of racism and police violence with intelligence, heart, and unflinching honesty. Soon to be a major motion picture from Fox 2000/Temple Hill Productions.Sixteen-year-old Starr Carter moves between two worlds: the poor neighborhood where she lives and the fancy suburban prep school she attends. The uneasy balance between these worlds is shattered when Starr witnesses the fatal shooting of her childhood best friend Khalil at the hands of a police officer. Khalil was unarmed.Soon afterward, his death is a national headline. Some are calling him a thug, maybe even a drug dealer and a gangbanger. Protesters are taking to the streets in Khalil’s name. Some cops and the local drug lord try to intimidate Starr and her family. What everyone wants to know is: what really went down that night? And the only person alive who can answer that is Starr.But what Starr does—or does not—say could upend her community. It could also endanger her life.

I barely have any words for this.

This was the best book I have ever read in my life. I wish I had read it last year when it came out. This is so relevant to what has been happening in America today, that it’s such a shame that a school district in Texas has banned this book. Goes to show that they want people to be silent about the discrimination and oppression that happens to this day.

This book brought up so many important points that are tough to discuss. Racism, discrimination, police brutality, cultural appropriation. You can see it every single day, and if you’re a minority like me, you probably feel it too. Take this quote from the book:

“That’s the problem. We let people say stuff, and they say it so much that it becomes okay to them and normal for us. What’s the point of having a voice if you’re gonna be silent in those moments you shouldn’t be?”

We need to stop allowing the people in our life to say racist, hurtful things, just because they are our friends or loved ones. It’s not okay, and the more that we don’t say anything, the more they are going to think it’s okay.  This book does an amazing job at bringing that into the light and making all of us accountable.

I was so angry when I read this book. I was angry that Khalil was murdered by Officer 115. I was angry that people assumed that Khalil was a thug because of his past. I was pissed that Starr’s white friend Hayley showed more sympathy for the white police officer than Khalil, almost reminding me of what happened with Brock Turner (you know, the rapist?) went to jail for that short amount of time. According to Hayley, that officer lost everything! His life was ruined because “he was doing his job”. Oh, that made me so angry! So, so angry. And I thought about every single black person that the news talked about, the ones that were killed by police officers when they were innocent and harmless, and the countless nameless ones that we don’t even know about.

I cried during every single moment that brought Star to tears. I cried when Khalil was shot so many times. It felt like I was watching my own friend get shot. It hurt, and I couldn’t imagine being in Starr’s place. The hurt and pain and trauma of watching someone in her life get shot – and not just once – had such an impact on her life that I don’t even know how she was able to be so strong. I don’t know what I would do in her place, but I felt for her. I was so proud of her when she was strong, disappointed when she felt weak. I cared about her and her family, and I invested so much of myself in her that I just needed to make sure she was okay – if that makes sense.

I loved this book so much. I could read this again and again, and I really hope that the movie that is coming out will do it justice. I highly recommend reading this book, and hopefully, you’ll be able to see why it’s so important.

Born: In Jackson, MS, The United States
Website: http://www.angiethomas.com
Twitter: acthomasbooks
Genre: Young Adult, Children’s
Goodreads Member Since: May 2013
Angie Thomas was born, raised, and still resides in Jackson, Mississippi as indicated by her accent. She is a former teen rapper whose greatest accomplishment was an article about her in Right-On Magazine with a picture included. She holds a BFA in Creative Writing from Belhaven University and an unofficial degree in Hip Hop. She can also still rap if needed. She is an inaugural winner of the Walter Dean Meyers Grant 2015, awarded by We Need Diverse Books. Her debut novel, The Hate U Give, was acquired by Balzer + Bray/HarperCollins in a 13-house auction and will be published in spring 2017. Film rights have been optioned by Fox 2000 with George Tillman attached to direct and Hunger Games actress Amandla Stenberg set to star.

4 thoughts on “The Hate U Give by Angie Thomas”