This book came into my TBR list through the power of GoodReads. I don’t remember what group it was that was having an Read to Review event, but this was the book that I had to read for an honest review. So, here it goes.

This book was basically about a high school girl that finds out that her best friend has a secret, a secret that apparently isn’t as uncommon as we were made to believe. To keep this blog mostly spoiler free, the secret that Vanessa’s best friend has is one that almost every single person in the world has. Eventually, Vanessa ends up having a secret of her own, in the form of Adam, a boy who needs her help to come back from the dead. He isn’t really a Ghost, per se, and it’s not like he has an unsolved murder that will help him cross over.

Not everyone becomes an Unfortunate, which is what Adam is. Unfortunates are born when they die of an unfortunate event. You find out how Adam died in the book, and it is heartbreaking to hear it. In order for Vanessa to help Adam cross over, she needs to perform one selfless act of kindness, not just being kind to get something out of it. There is no exact number of acts that she needs to perform in order to change Adam back, to give him a second chance at being alive again, so she just has to continue to do what she needs to if she wants to help him.

The problem is: does she really want to?

It was very difficult for me to get through this book, mostly because of the main character of Vanessa. She was an extremely selfish girl, and it made sense that she would have to learn how to be kind without expecting anything in return in order for her to save Adam. There are different levels for each Unfortunate, and each level deals with a different task and emotion. The first level, the one that Adam falls in, is the lowest level and has the most shallow of the Unfortunates. I believe that if Vanessa were to ever become an Unfortunate, she would fall in this same category.

I also feel like Adam could be a little selfish as well, but much less than Vanessa could be. His time being an Unfortunate, and waiting until he was able to be seen with Vanessa changed him enough that he wasn’t as selfish as he was when he died. He tries so hard to get Vanessa to understand how to help him, to even get to know her, and yet it seems like it’s so difficult to get through to her. I could only imagine having to deal with her attitude.

There is a happy ending to this, and Vanessa does have a little character development to make her a little bit more bearable, but I feel like the story was rushed and needed some more editing. I probably wouldn’t read it again, but for those who like reading about ghosts and happy endings, then you should give this book a try. 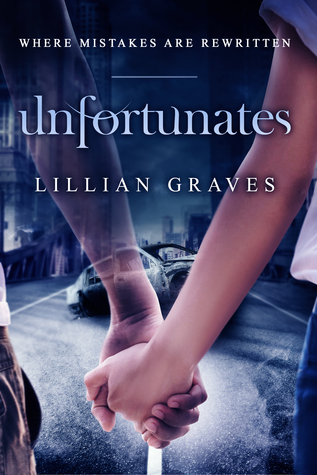 Seventeen-year-old Vanessa is about to get a new life—whether she wants one or not. With a best friend keeping a crazy big secret from her and her parents rubbing their perfect high school love story in her rocky relationship’s face, she doesn’t have any more cares to give. So when Adam, a ghost who calls himself an Unfortunate, tells her she is his Match – the one who can help him earn his second chance at life by committing random acts of kindness – she nearly blows a fuse.

No, scratch that. It shot straight off. I mean, why help a ghost who may just be in her head? What was in it for her?

After the denial and resistance pass, Vanessa begins to realize not all of arrangement is against her favor. There is something rather cute about Adam and maybe, just maybe, if he is telling the truth and she brings him back to life, he could be her new date to prom.

But can her selfish ways live up to his expectations?