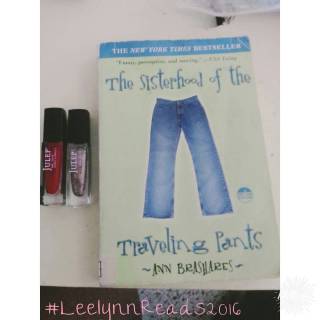 The odds of the same pair of jeans fitting four different girls with four very different body types is pretty much impossible, right? Well, usually that would be correct, but in this case, not so much. Carmen Lowell, one of the main characters of this book, happens upon a pair of jeans at a second hand clothing store that she only buys because she didn’t want to leave empty handed. But then she forgets all about them until the day before her and her three best friends separate for the first time in their lives. It’s summertime, and all four girls will be off having their own adventures for once, without the support and companionship of one another. It’s then, in Carmen’s room, that the Pants resurface, where Lena gets the idea that all of them should try them on to see who should get them. This is where it all begins, where the Sisterhood begins.

This book follows the story of four different girls: Carmen, Lena, Tibby and Bridget. Four very different personalities but all very close to one another. They became the best of friends in part to their mothers, dubbed The Septembers by their prenatal yoga instructor. The girls were inseparable, during the good and the bad times. Since this is the first time that the four of them won’t be around one another, they are forced to deal with things on their own, with only the Pants to serve as their anchor when all hell is breaking loose.

This is a book that is very close to my heart, although it took me many years to finally get the nerve to finish reading it. I watched the movie when it came out, seeing all of my favorite characters come to life and finally getting to see how this novel ends. The character that I related to the most was Carmen, especially because she had to come to terms with the fact that she was angry with her father, and she needed to confront him with what was always bothering her: why he left her and her mom and what made his new family so much better than his old one. It hit me the most because this is how I feel personally, and I envy how brave Carmen was to finally tell her father how she really feels.

The Pants may not be something that’s real to me, something that I can hold on to when I feel the need to empower myself, but maybe I don’t need it. Carmen, Lena, Tibby and Bridget may feel like they needed the Pants that summer, as a way to encourage them to get through this tough time, but in reality they just needed one another. More letters, more phone calls, more communication between the four of them so that they wouldn’t feel like they were alone during the summer. Whatever happened to them, whatever they needed to get through in order to grow up, it made them stronger in themselves, and stronger in each other. 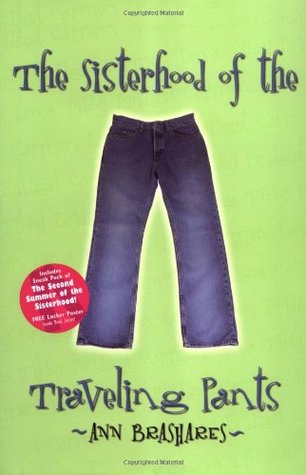 Carmen got the jeans at a thrift shop. They didn’t look all that great: they were worn, dirty, and speckled with bleach. On the night before she and her friends part for the summer, Carmen decides to toss them. But Tibby says they’re great. She’d love to have them. Lena and Bridget also think they’re fabulous. Lena decides that they should all try them on. Whoever they fit best will get them. Nobody knows why, but the pants fit everyone perfectly. Even Carmen (who never thinks she looks good in anything) thinks she looks good in the pants. Over a few bags of cheese puffs, they decide to form a sisterhood and take the vow of the Sisterhood of the Traveling Pants . . . the next morning, they say good-bye. And then the journey of the pants — and the most memorable summer of their lives — begins.