“The last week had made her realize something more important than her feelings for him: her true self.  She wouldn’t die without him; she would miss him, sure, but it wouldn’t change who she had become.”

In an attempt to change her life, Rebecca transforms herself into a new girl, an alter ego named Caden, in order to escape the abuse that she suffered from her ex boyfriend Sean. In the aftermath of yet another altercation with Sean, Caden finds herself stranded in the middle of a bridge, contemplating on whether she should jump or not. Yes, it reached an all-time low for her at that moment, and if she had ended up jumping, everything that happened in this book would have never taken place. Is that a good or a bad thing, it’s yet to be said, but the main thing for sure is that Caden’s life will never be the same.

When Caden decides that ending her life is not worth it, no matter what Sean did to her, she ends up getting a ride from the mysterious Gabriel, a sarcastic, ill-tempered teenager who decides to end up helping her out with a place to stay for the night. It feels like she may have overstayed her welcome, and even though she has nowhere else to go, she tries to figure out a way to convince Gabriel to take her in. All of a sudden, she wakes up to the strangest noise in the night, and finds someone completely different in the house. He claims that his name is Tom, and his personality is almost one of a child. The longer she stays in that house, the more she comes to realize that not is all as it seems, and that maybe Gabriel and Tom are actually the same person. But which one does she love more? And if they are the same person, will she do whatever it takes to make sure she gets only one of them in her life, even if it means getting rid of the other one?

This book was an interesting one for me, and while I believed that it had a supernatural element prior to reading it, going through it made me realize that not everything has an unnatural explanation. Gabriel and Tom are a prime example of Dissociative Personality Disorder, and it was interesting to see how the author would explain it in the book. Rather than making it seem like it was a disease that made people crazy, Fairfall has Caden do her research in order to understand what’s happening with Gabriel. What I didn’t like about the book was what Caden did to Tom, showing how selfish she is when it comes to what she wants. She may have been abused by Sean and almost killed by him, but what she did to Tom was completely out of line. She made promises to both Gabriel and Tom and yet she couldn’t follow through. The ending of the book really does set up the next book, and I’m really hoping that the second book comes out soon, even if it’s just to see what ends up happening once and for all. 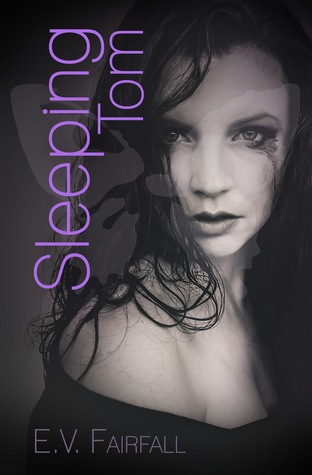 Hitchhiking is a bad idea but Caden is desperate. When she accepts a ride from the first car to come by she meets Gabriel. He’s her age, hot, and the closest thing she has to a savior. Problem is, he is a total jerk. With nowhere to go, Caden convinces Gabriel to let her stay with him for one night. He reluctantly lends a couch.That night Caden wakes up to strange noises. Concerned, she rushes into Gabriel’s room, already anticipating his bad temper. Instead, he’s kind, sweet, and suspiciously harmless—nothing like the man who gave her a ride. He seems like a different person altogether, and claims he is. By night he is Tom, and by day he is Gabriel. Caden finds herself drawn to the mysteries hidden in his eyes.
For Gabriel, Caden is an annoying mistake. One night turns into many, and despite all his anger towards her, she stays. She even seems to accept him and his flaws, but he still doesn’t trust her—is she staying for him, or has she already discovered more than he’s willing to share?