“Each time she had kissed her husband, she had hoped the sensation would vanish, and each time, she was disappointed. But how, after all that time and after all the love they had shared, could it still not be true love?” 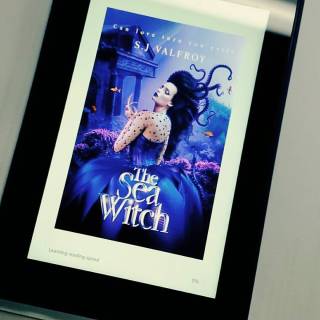 Evil isn’t born. It’s made. Or so that’s what seems to be the case in this story. Whether the circumstances surrounding the subject in question makes them turn evil, or the potential to become evil buried deep inside them is uncertain. Can it be a combination of both? Can the mere fact of having a less than desirable upbringing, and the desire to get what you want no matter what the costs lead you to do unspeakable things? Can it truly make you evil? In The Sea Witch, I would say it’s a combination of both.

When we first meet Serena, she is such an innocent girl. Well, she’s not the kind of woman that her mother is, and we can clearly see that she wants nothing to do with the magic that she was born with, the magic that her mother wants her to give in to. All she wants is for Prince Triton to actually notice her, and maybe even talk to her long enough to fall in love with her. It may be a girl’s simple dream, but it’s something that she wants more than anything, even if it means taking down whatever stands in her way.

It wasn’t until Triton’s mom, the Queen Amphitrite insults her heritage and her social standing is just the push Serena needed to start on the long and tiring journey to get what she wanted. It was also the moment that she realized that the royal family would never see her as anything but a maid and the daughter of a sea witch, in essence judging her on something that she has no control over. Of course, this was wrong of the Queen to be so cruel and heartless, but her fate wasn’t what she deserved. Even the King’s fate was something that could have been avoided if they just stopped judging people.

Thus the story continues until one day, even after Triton and Serena are living “happily every after”, their whole world is shattered with the arrival of a beautiful mermaid named Athena, the one woman who ends up being Triton’s true love. By that time, no good can come from this story, and the ending of this insight to the life of a notorious sea witch is one that we know all too well.

I really enjoyed this book, and I liked that we got to have a little background into the life of a villain that we all know and love to hate. It’s a very refreshing story that, even though it doesn’t have a happy ending, isn’t just a retelling on what we already know. It falls in line with the likes of Maleficent, where we find out what makes them turn bad, or if they are even really bad in the first place. I do feel like Serena ended up going over to the dark side, and it didn’t help that her mother was key in helping her turn evil, but she shouldn’t have done a lot of the things she did. Triton handled the situation in a way that I wouldn’t have suspected, but it shows how much he’s actually matured from the time we first meet him to the end of the book. Serena’s story is actually pretty heartbreaking, and I can see why she would want revenge. There were some moments where the timeline kept jumping back and forth and it would get confusing for me, but that didn’t happen all the time. I was still able to understand the bigger picture. All in all, I thought this was a very good first book to the series, and I can’t wait to see what other villains we have in store.