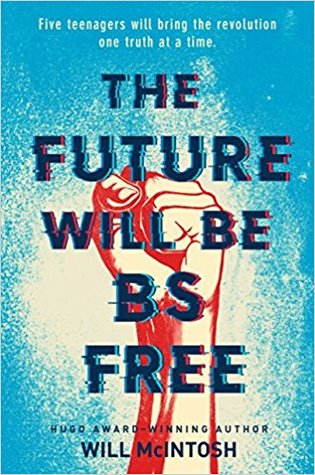 In this terrifyingly timely tale for fans of The Eye of Minds, a teen and his group of friends find themselves on the run after using a genius lie-detector contraption to expose their corrupt government.In a Putin-esque near-future America, the gifted and talented high school has just been eliminated, and Sam and his friends have been using their unexpected free time to work on a tiny, undetectable, utterly reliable lie detector. They’re all in it for the money–except Theo, their visionary. For Theo, it’s about creating a better world. A BS-free world, where no one can lie, and the honest will thrive.Just when they finish the prototype and turn down an offer to sell their brainchild to a huge corporation, Theo is found dead. Greedy companies, corrupt privatized police, and even the president herself will stop at nothing to steal the Truth App. Sam sets his sights on exposing all lies and holding everyone accountable.But he and his friends quickly realize the costs of a BS-free world: the lives of loved ones, and political and economic stability. They now face a difficult question: Is the world capable of operating without lies, or are lies what hold it together?

“Powerful people aren’t smarter or more capable than the rest of us; they’re just more willing to lie, cheat, steal, even kill.”

One of the scariest things about this book is that it doesn’t feel too far off from what I think America will be like, but that’s besides the point.

McIntosh brings a version of the United States to life in this book, where the country is so devastated financially that even high schools are shut down because they lack funding. Once the funding is gone, the students aren’t allowed to come back, and the teachers are quickly displaced. People are homeless in the hundreds, trying to survive in a place where there is barely anything to work for. It’s a nightmare, and it seems like it’s thanks to their current President. For one, President Vitnik had no political experience prior to being elected (sound familiar?) and has convinced the Legislature to get rid of the two term limit enforced after FDR held a record four-term Presidency. Now the county is in the hands of this president that has monopolized on the country’s lack of resources by being one of its main suppliers – literally everything has her face and name – while the country continues to suffer.

In comes Sam Gregorious – lovely name – and his five friends that now have a lot more free time on their hands to invent a lie detector that doesn’t rely on someone’s heart rate, but is 100% more reliable than anything we have ever seen before. Dubbed the “Truth App”, Sam and his team started off their journey to create the truth app to make a boat load of money and get their families out of poverty, while Theo wants to create a “bullshit-free world” where corruption will fall and the honest will rise. Theo was the only one that saw their invention as something more than an instant cash cow, and of course he was the one that was murdered by those that sought to shut their invention down. FYI, that’s not a spoiler since it’s in the synopsis, but it still sucks.

Throughout the entire journey, the book moved way too fast for me. Not one that made me want to find out what happened next, but one where I was always wondering why a chapter ended the way it did, or started the way it did. It didn’t seem cohesive, but I could at least follow what was happening. Scenes jumped so quickly that you were left wondering what happened in the middle – or why it seems like those specific scenes were deemed important.

It was also difficult to sympathize with Sam, or wonder why he was the one that was “in charge” of this whole thing. Theo truly was the brains, and throughout the book I didn’t see what made Sam the leader, if he ever was one. He was the scapegoat, the one that the others chose to blame when “shit hit the fan” and all other disastrous events took place, but did they really show him respect at all? Not really. Was it just because Theo was murdered and they had nobody else to fall behind? He didn’t seem like the type that his friends really rallied behind at all. Not to mention he seemed completely obsessed with Molly, his crush since forever that didn’t like him back, and that seemed to have gotten in the way of a good storytelling. There was a love triangle for no reason, and the only reason why it had any merit was because it fractured the dynamic of the group for such a ridiculous reason. It was not needed, but teen boys seem to be girl-centric when the world is going up in flames.

I think this would have probably made an interesting TV movie, or movie in general, and while I liked the concept of the story, I felt like it could have been explored more. The ending was nice, and I’m glad things will hopefully start to work out again for the United States, but maybe having more of what happened before, and why Vitnik did what she did could be some bonus content for us to feel better about this story.