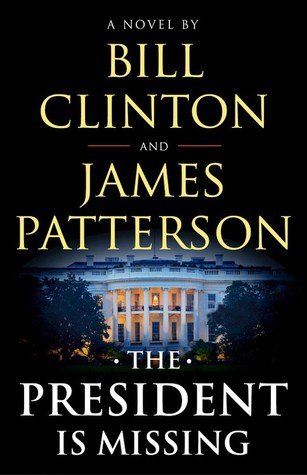 President Bill Clinton and bestselling novelist James Patterson have written a spellbinding thriller, The President is Missing.As the novel opens, a threat looms. Enemies are planning an attack of unprecedented scale on America. Uncertainty and fear grip Washington. There are whispers of cyberterror and espionage and a traitor in the cabinet. The President himself becomes a suspect, and then goes missing…Set in real time, over the course of three days, The President Is Missing is one of the most dramatic thrillers in decades. And it could all really happen. The President Is Missing is Bill Clinton and James Patterson’s totally authentic and spellbinding thriller.


“Gerald Ford once said that an impeachable offense is whatever a majority of the House of Representatives says it is.”

Let’s try to remember everything that I liked about this book after five months since reading it… I’m sure it will come to me.

As you’ve probably seen during my review history, I am not one to stray from my main genre of Young Adult books. Even then, I don’t go into certain sub genres like Contemporary or Romance. However, I took a chance with this book being a Mystery/Thriller (a political one at that) and I was blown away.

For one, the voice acting of Dennis Quaid as the President was absolutely amazing. I may be biased because I really enjoy Quaid as an actor, but it sold me in continuing to listen to this book. Even though the contents of the book only took place within a span of three days (it felt way longer to me), it moved with such an amazing pace that I could not stop listening to it. I think President Clinton and James Patterson did an amazing job of making me want to follow this fictional President during his time away from the White House, and really thinking about what would happen if the United States was under that kind of attack.

I liked how it ended, although I was sad about a certain part of it. I’m a sucker for women that can kick ass… let’s just leave it at that. All in all, I recommend this to those that may want a taste of political thrillers, and I highly recommend listening to the audiobook if that’s your thing. Short review, but at least it’s done.