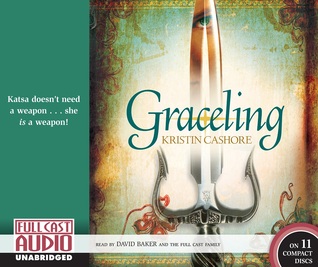 Katsa has been able to kill a man with her bare hands since she was eight—she’s a Graceling, one of the rare people in her land born with an extreme skill. As niece of the king, she should be able to live a life of privilege, but Graced as she is with killing, she is forced to work as the king’s thug.When she first meets Prince Po, Graced with combat skills, Katsa has no hint of how her life is about to change. She never expects to become Po’s friend. She never expects to learn a new truth about her own Grace—or about a terrible secret that lies hidden far away… a secret that could destroy all seven kingdoms with words alone.

“How absurd it was that in all seven kingdoms, the weakest and most vulnerable of people – girls, women – went unarmed and were taught nothing of fighting, while the strong were trained to the highest reaches of their skill.”

So I have heard of this book before, and I was always told that I should read it right away. I received a lot of recommendations for this book throughout the years and I only now got to reading it. I must be one of the ones that weren’t completely blown away by this book, unfortunate for me because I really wanted to love it.

I would say that to me, the book moved too slow for me. I appreciate the action scenes and I can appreciate that there needed to be some story building, but to me, there were portions that took way too long to happen. A huge part of the book was Katsa, the main Graceling, and a little princess named Bitterblue traveling from one kingdom to the other. Since the distance between these two kingdoms is pretty big – at least, that’s the image I got reading it with how long it took them – I feel like those scenes could have gone much faster. What I thought was the climax of the story, the “showdown” if you will, was barely a blip compared to the journey. Was that the point, and maybe I just didn’t understand it? I’m not sure.

I apologize that this review is short. Other than the pacing, I wouldn’t say there was anything particularly wrong with this book. I enjoyed the premise, and I’m glad that Katsa was able to grow as a character, but there were times where I just wish I could have skipped some chapters to get on with the story.

Born: The United States
Website: http://kristincashore.blogspot.com/
Genre: Science Fiction & Fantasy, Young Adult, Ebooks
So, here’s the short tale of me: I grew up in the countryside of northeastern Pennsylvania in a village with cows and barns and beautiful views from the top of the hill and all that good stuff. I lived in a rickety old house with my parents, three sisters, and a scattering of cats, and I READ READ READ READ READ. I read while brushing my teeth, I read while chopping parsley, the first thing I reached for when I woke up in the morning was my book; the only two places I didn’t read were in the car and in bed. What did I do then? The one thing I liked even more than reading: I daydreamed.And so, without knowing it, I was planting the seeds. Reading and daydreaming = perfect preparation for writing.At 18 I went off to college– thank you, Williams College, for the financial aid that made this possible– and it almost killed me. College is hard, man, and the Berkshires are cloudy. A (phenomenal) year studying abroad in sunny Sydney revived me. After college I developed a compulsive moving problem: New York City, Boston, Cambridge, Austin, Pennsylvania, Italy, and even a short stint in London, where my showerhead hung from the cutest little stand that was exactly like the cradle of an old-fashioned telephone. The best phone calls are the pretend phone calls made from your telephone tub.During my stint in Boston, I got an M.A. at the Center for the Study of Children’s Literature at Simmons College. (Thank you, Simmons, for the scholarship that made this possible!) Grad school almost killed me, but I felt a lot more alive than when I was almost being killed in college. The Simmons program is stupendous. It got me thinking and breathing YA books. It got me writing.Am I getting boring?Since Simmons, I haven’t stopped writing, not once. I’ve developed a compulsive writing problem that makes my moving problem look like a charming personality quirk. I can’t stop! But it’s okay, because I don’t want to stop. I’ve been writing full-time– well, more than full-time, really– for about 4 years now, first doing educational writing for the K-6 market and now working on my novels. It’s a dream job, which is another way of saying that when I shop for work clothes, I go straight to the pajamas section.Should I say a little bit about what I’m like? I’m fiercely independent. I am sometimes a hermit, but never for very long. I am in search of the perfect cat. I’m a recovering Catholic. I meditate, and when I do, Prince Harry appears in my subconscious and meditates with me. It’s a little strange but I don’t think there’s anything I can do about it. Sometimes he’s not the only one; the other day it was me, Prince Harry, the Dalai Lama, Mr. Rogers, Coco the gorilla, and George Clooney. We were all floating above the earth looking down at the continents as they passed. George Clooney suggested I visit Providence, Rhode Island. The Dalai Lama sighed deeply and said he’d really like to visit Tibet.Poor Dalai Lama.I recently moved from Jacksonville, Florida, to Cambridge, Massachusetts, trading the St. Johns River for the Charles River and pelicans for geese. As a native northerner, it’s nice to be back in the land of four seasons. I feel as if I’ve come home. :o)And that’s my story.