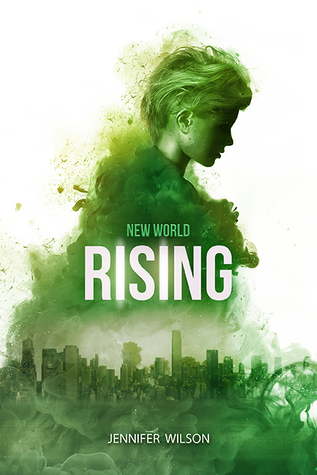 Worlds collide in debut author Jennifer Wilson’s graphic dystopian series where Divergent meets Mad Max. Since witnessing her parents’ murders at the age of eleven, Phoenix’s only purpose in life has been to uphold her mother’s dying words – to be strong and survive. But surviving outside of The Walls – outside of The Sanctuary – is more like a drawn-out death sentence. A cruel and ruthless city, Tartarus is run by the Tribes whose motto is simple, “Join or die.” Refusing to join and determined to live, Phoenix fights to survive in this savage world. But who can she trust, when no one can be trusted? Not even herself…The first of a trilogy, New World Rising is an epic tale of survival, instinct, trauma, and the extraordinary power of human connection.“Savage and raw, Jennifer Wilson pulls no punches in this blood tingling dystopian.” Kimberly Derting, award-winning author of The Pledge Trilogy

“Even the most gentle people have a dark side you know.” I was trying to warn him.“I know,” he said handing me the other bowl of soup. “It’s how you control that darkness that defines you.”

There seems to be a trend on YA dystopia books lately, with the popularity of books like The Hunger Games and The Maze Runner. It seems like everyone wants to know how the world would be if society, as we knew it today, went through such a drastic war that almost everything was destroyed. It’s a fascinating subject, and I’m glad to know that there are so many different takes on the question of “what if”.

In this world, there really isn’t a reason for why the world is in such disarray. However, we do know that in the “bad” part of the city, it is overrun by groups of people called the Tribes. Each Tribe has their own characteristics, but all of them are extremely deadly in their own way. One of the Tribes, known as the Ravagers, are considered the most dangerous, as they are thought to be the most violent. The Ravagers were the ones that killed Phoenix’s parents, right in front of her eyes. If her parents hadn’t hidden her in a sewage grate, she would have been killed too, and this book wouldn’t have happened. This was when she was eleven years old, and for the past six years, she has had to learn how to survive on her own in such a perilous city.

For six years, she had never made any friends or other relationships. She was a recluse. She kept to herself unless she needed to make a trade for survival. She even went to great lengths to make sure that she didn’t sleep in the same place for more than one night in a row. One night, everything changes when she sees a group of Ravagers hunting a little girl, and she does the unthinkable thing of trying to save her.

From that point on, she finds herself in a secret society, a group hidden from the rest of the Tribes, where defectors from both the Sanctuary and Tartarus (the city that Phoenix survived in for the past six years) are working together to accomplish… well it depends. Some of them want to take over the city from the Tribes, while the others want to take down Sanctuary. So either way, someone is going down. But who?

Phoenix is broken. She not only watched the vicious murder of her parents, but she had to watch her mother get raped by the Ravagers before she was killed. To make matters worse, another Tribe called the Scavengers tainted the bodies by stealing from them after the Ravagers were done from them. She has been traumatized so much, that she can’t even allow herself to feel, to care about anyone, even though the alternative has been really lonely. I’m just so glad that by the time the book was over, she opened her heart to two people, and she learned to love again.

Website: http://www.thenewworldseries.com/
Twitter: J_KayWilson
Genre: Young Adult, Fiction, Fantasy
Goodreads Member Since: August 2014
As a child Jennifer loved getting lost in the stories of others, but struggled greatly with reading. A notoriously slow reader who stumbled with words and spelling, Jennifer shied away from books, leaning heavily on musical theater and movies to get her inspirational fix.It was not until in her mid-teens, when a persistent friend convinced her to read the Harry Potter series, that Jennifer found her love for the written word. J.K. Rowling’s books opened doors not only to the fascinating world of a young wizard, but to a life filled with a multitude of literary friends and fantastical worlds. Once a timid reader, Jennifer now devours books and loves getting lost in a new series.Jennifer had wanted to write her own novel since her early twenties, but unfortunately inspiration doesn’t always strike on command. Her first book, The Chosen, was completed in 2013. But as most first attempts go, it was a flop. While looking through a multitude of rejection letters, inspiration struck again, putting Grace’s story got on hold as Phoenix’s began.New World: Rising began to fill Jennifer’s brain, flowing like a fully opened valve from her fingertips. What was once such a struggle in her early years suddenly became a passion.When Jennifer is not writing, she is enjoying life in Colorado, rock climbing, camping, exploring new foods, playing with her golden retriever, Duke, and sharing her life with her handsome and wonderful husband.